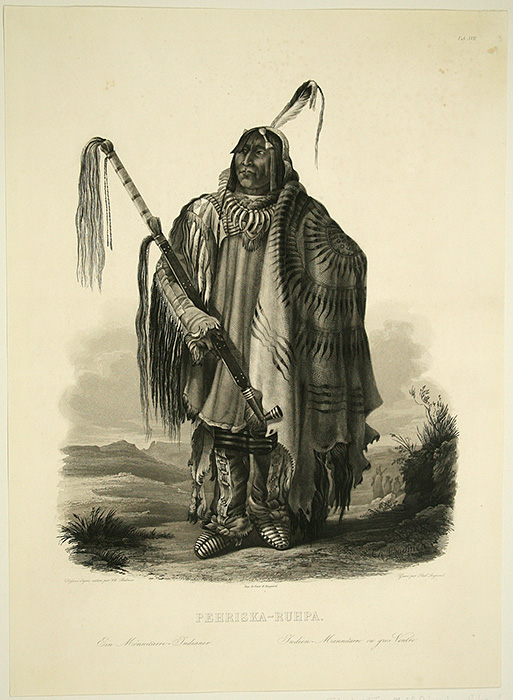 Portrait of the chief Pehriska-Ruhpa (“Two Ravens”). Warrior of the Minnetaree Tribe (also called Hidatsa or Gros Ventres of the Missouri). The Minnetaree Native American people, a subdivision of the Sioux people, lived at the upper Missouri River between Heart River and the Little Missouri River.

Pehriska-Ruhpa was painted twice by Bodmer in March 1834. In this portrayal he wears an impressive shirt trimmed in quillwork, fringed in ermine and locks of human and dyed horsehair. His leggings, made from the entire skin of a deer and simply folded over and sewn, are trimmed in quills. The bear claw necklace was a prized item. It was symbolic of great wealth.

In the second portrayal (Tableau 23) he is dressed in the regalia of the Hidatsa Dog Society, of which he was a principal leader.

Aquatint and etching by Paul LeGrand (worked about 1820-1840) after watercolour paintings by Karl Bodmer, from Prince Maximilian's “Travels in the Interior of North America, 1832-1834”.