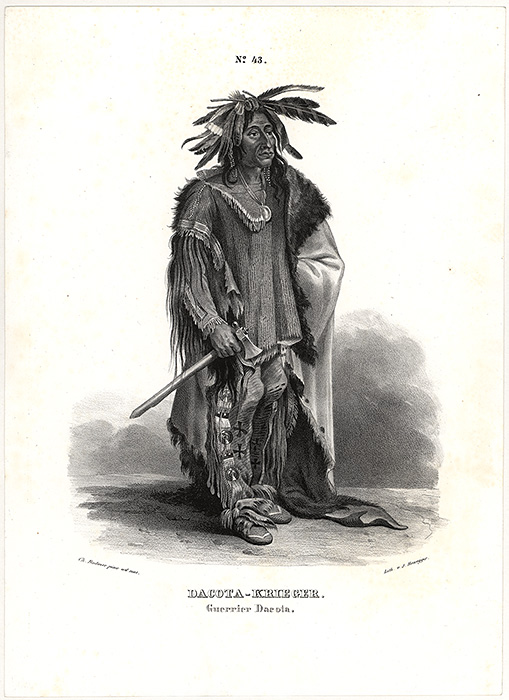 Wahk-Tä-Ge-Li, a Sioux warrior. This Yankton chief, whose name was translated by Maximilian 'Gallant Warrior', was called by the Americans 'Big Soldier'.

Bodmer's watercolour portrait, which he made at the Sioux agency in May 1833 depicts the nearly sixty year old, six and half foot warrior in embroidered bright coloured porcupine quills. The fringe on his shirt sleeve is human hair said to been taken from a Mandan foe. The chief posed for two days, only occasionally smoking his pipe-tomahawk.

Lithograph by J. Honegger, made after Tableau 8 of Prince Maximilian's “Travels in the Interior of North America, 1832-1834”, which was based on watercolours and drawings by Karl Bodmer. Published in 'Naturgeschichte und Abbildungen der Menschen der verschiedenen Rassen und Stämme' by Heinrich Rudolf Schinz, Zurich 1845.

Between 1824 and 1845 the Swiss natural scientist Heinrich Rudolf Schinz (1777-1861) published several editions of his 'Naturgeschichte'.

In the second edition from 1835 for the first time three prints were published, which were lithographed after the original drawings and watercolours by Karl Bodmer: a Dakota Wah-Menitu, a Muskoke-Indian and a Piegan-Blackfoot.

For the third, revised and extended edition with the title 'Naturgeschichte und Abbildungen der Menschen der verschiedenen Rassen und Stämme', published in 1845, Schinz had even more original drawings and watercolours by Bodmer and the Tableaus published with Prince Maximilian's “Travels in the Interior of North America, 1832-1834”, which he now could use for his book.

7 plates were made by Honegger's Lithographic Institute in Zurich after the Tableaus and original drawings and watercolours by Bodmer, with 11 Native Americans portrayed, starting with Mato-Tope (Taf. 38), the Mandan chief, whom Prince Maximilian and Bodmer became friends with (see BT1389_s38). The Native Americans shown on the lithographs appear in reverse of the Tableaus.