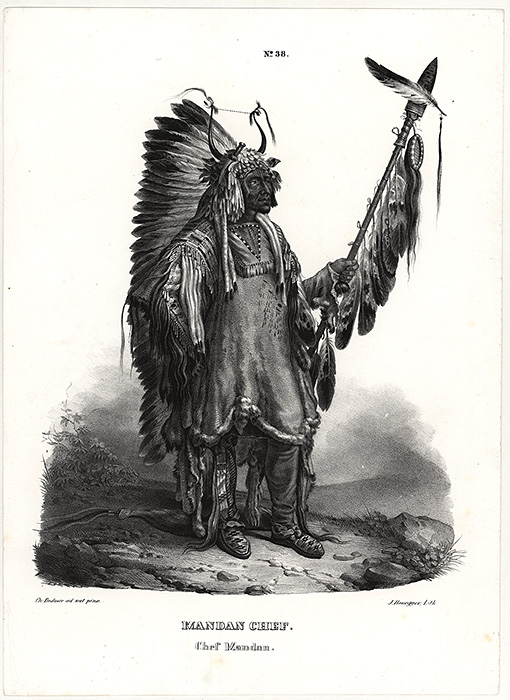 Mato-Topé (Four Bears) was a popular chief known to Maximilian and Catlin as one of the most notorious chiefs of the early 19. century. The chief was an enthusiastic painter, proud of his accomplishments. He is dressed in an elaborate skin clothing and is wearing a headdress of eagle feathers of a size, which denoted high rank.

Lithograph by J. Honegger, made after Tableau 13 of Prince Maximilian's “Travels in the Interior of North America, 1832-1834”, which was based on a watercolour by Karl Bodmer. Published in 'Naturgeschichte und Abbildungen der Menschen der verschiedenen Rassen und Stämme' by Heinrich Rudolf Schinz, Zurich 1845.

Between 1824 and 1845 the Swiss natural scientist Heinrich Rudolf Schinz (1777-1861) published several editions of his 'Naturgeschichte'.

In the second edition from 1835 for the first time three prints were published, which were lithographed after the original drawings and watercolours by Karl Bodmer: a Dakota Wah-Menitu, a Muskoke-Indian and a Piegan-Blackfoot.

For the third, revised and extended edition with the title 'Naturgeschichte und Abbildungen der Menschen der verschiedenen Rassen und Stämme', published in 1845, Schinz had even more original drawings and watercolours by Bodmer and the Tableaus published with Prince Maximilian's “Travels in the Interior of North America, 1832-1834”, which he now could use for his book.

7 plates were made by Honegger's Lithographic Institute in Zurich after the Tableaus and original drawings and watercolours by Bodmer, with 11 Native Americans portrayed, starting with Mato-Tope (Taf. 38), the Mandan chief, whom Prince Maximilian and Bodmer became friends with. The other print we can offer shows the Dakota-warrior Wak-Te-Geli (see BT0889_s43). The Native Americans shown on the lithographs appear in reverse of the Tableaus.