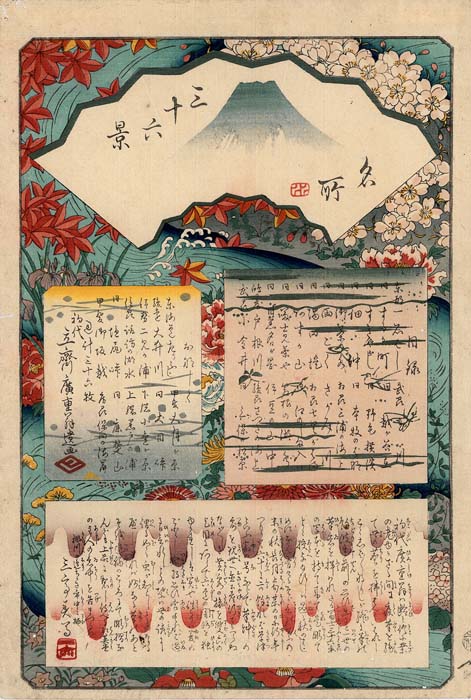 Hiroshige: Meisho sanjûrokkei
Move your mouse over image or click to enlarge

Title page and table of contents for the “Thirty-six Views of Mount Fuji”:
A depiction of Mt. Fuji in a folding fan with the series title on top, in bottom three text cartouches, surrounded by a rich composition with a meandering stream between various flowers of the seasons and maple leaves.

Fine impression and colours, with embossing. Unbacked. Right and bottom margins slightly trimmed. Some very small wormholes. Overall very nice fresh condition.
Ill. in Uhlenbeck/Molenaar, Mount Fuji, Sacred mountain of Japan. Leiden, 2000, p. 54, No. 53. Cf. also British Museum, no. 1902,0212,0.396.37; MFA Boston, Bigelow Coll. No. 11.39252 a.o.; MAK Vienna Nos. BI 17427-1, BI 17426-2-1. Honolulu Museum of Art, No. 16790. There are different colour variants of the text cartouches.
According to Uhlenbeck/Molenaar and others, this sheet, which was printed in the year after Hiroshige's death, was created by Hiroshige II; other authors assign it to Hiroshige I.
An particularly lavishly illustrated title page.