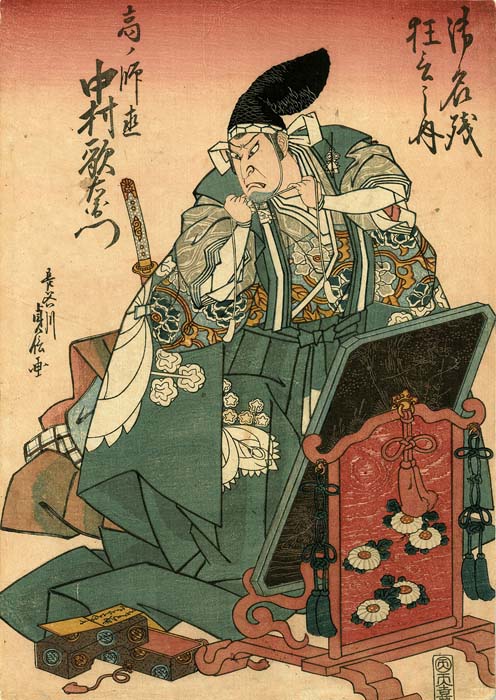 Sadanobu: Nakamura Utaemon IV
Move your mouse over image or click to enlarge

The actor Nakamura Utaemon IV in front of a large mirror, dressing for his farewell performance (Nagori Kyôgen) at the Nakamura Theatre in Edo in 1838, playing the role of Kô no Moronao in the famous drama "Kandehon Chûshingura" (The Story of the 47 Loyal Rônin).

Excellent impression and colours. A little trimmed, unbacked. A few weak and unobtrusive spots, a stain in the script on the left. Bottom margin at left a little uneven, with a small tear. Overall very good condition.
Rare, early print by Sadanobu, with a strong and scarce depiction of a famous star dressing for the stage. The departure of Utaemon for Ôsaka took place prematurely because of failed salary negotiations; in the farewell performance Utaemon starred in seven (!) different roles (Schwaab, p.181).
Ill. in: Dean J. Schwaab, Osaka Prints, London 1989, p. 180f, no. 181; see also Kansai University Library Collection, No. 208444840